Pratexo Announces the Start of Business in Japan

Pratexo, Inc. (“Pratexo”), a leading-edge computing platform company that has developed a next-generation edge computing platform to enable customers to enjoy the benefits of cloud computing at the edge has now launched in the Japan market. Pratexo Edge Micro Clouds are highly scalable, resilient, private, and secure based on open, and proven technology.

Pratexo will introduce their solution at EdgeTech+2022 held at Pacifico Yokohama from November 16 (Wed) to 18 (Fri). Blaine Mathieu, CEO, will also deliver a keynote speech titled “Bringing the Benefits of Cloud Computing to the Edge.”

With the advancement of IoT and artificial intelligence (AI) technology, more advanced digital transformation (DX) solutions are expected that can digitize the real world and grasp and process business in real time. However, due to the costs, delays, security, and privacy associated with sending large amounts of data to the cloud, DX has not progressed as expected. To solve these challenges, Pratexo has developed an edge computing platform that accelerates AI and IoT.

Traditionally, IoT data was sent directly to the cloud, but with Pratexo, you can start by bringing several IoT devices together at the edge. Furthermore, by taking full advantage of Pratexo’s capabilities, you can enjoy the benefits of cloud computing at the edge by forming a micro cloud that clusters multiple edge nodes and distributes and shares computing processing. In this way, Pratexo enables you to develop highly scalable, available, resilient, and secure solutions at the edge. 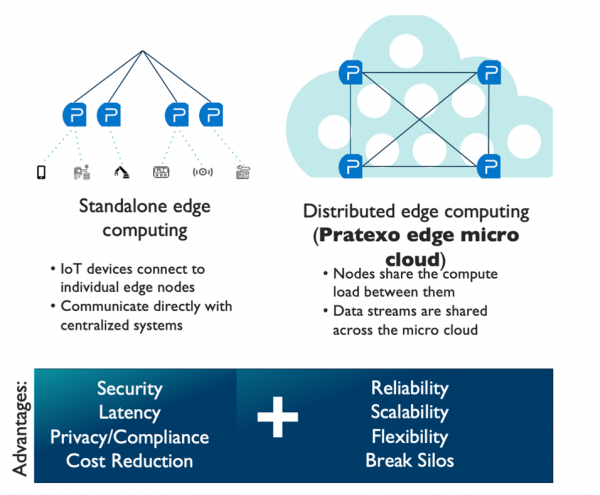 In addition, the Pratexo Studio, a low-code development environment, significantly simplifies and accelerates the development and operation of complex edge solutions. Solution architects can design pre-made devices, edge nodes, micro clouds, and software components on the canvas by dragging and dropping. Once the design is complete, they can automatically generate specifications and installation scripts with the click of a button and deploy the software as a digital twin or in the physical environment. 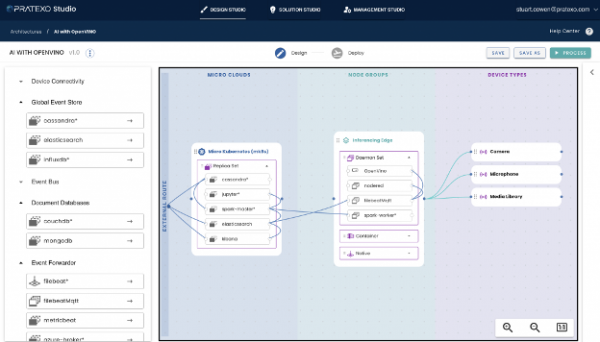 Step 2: Instantly deploy a designed architecture to a virtual or physical environment 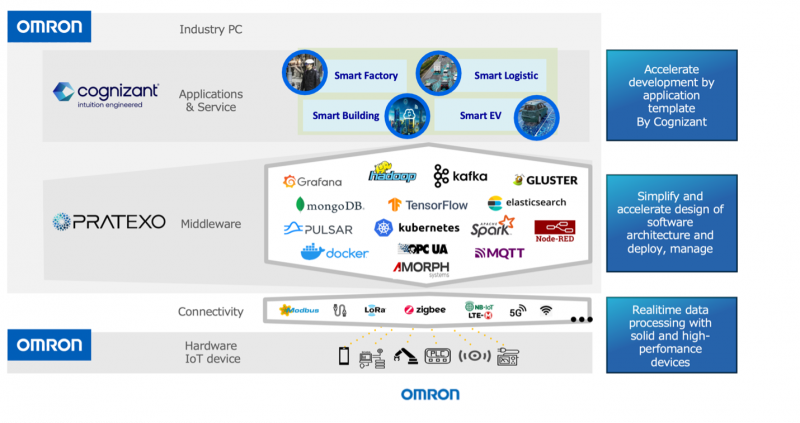 Pratexo enables highly scalable, resilient, and secure edge computing solutions. Moreover, the development and operation of distributed edge infrastructure can be significantly simplified and accelerated compared to traditional methods. Instead of relying on experts with extensive experience and knowledge, ordinary software architects and engineers can develop distributed edge computing solutions in days or weeks (not months) and operate them flexibly.

Pratexo will showcase its Pratexo edge computing platform in collaboration with Cognizant at the Omron booth at EdgeTech+2022, the Japan’s largest edge computing event, to be held at Pacifico Yokohama from November 16 (Wed) to 18 (Fri).

OMRON is proposing the “Virtualized Control Platform Concept” to flexibly build control systems by distributing software on industrial PCs using virtual technology and orchestration technology to control robots and machines in the field more efficiently. Pratexo strongly supports the Virtualized Control Platform concept advocated by Omron. At this exhibition, we will introduce this concept as one solution for realizing this concept quickly and reliably.

“OMRON, which supplies many field devices such as sensors, drives, and PLCs, and has excellent OT skills, aims to integrate IT technology, which is the key to factory digitalization. Although progress is being made in optimizing the utilization rate of equipment at the site, there are still many issues to be solved in improving the productivity of the entire plant. The solution to this problem is the digitalization of factories.

As a solution, we have launched the concept of “Virtualized Control Platform,” a control platform that connects factory sites, edges, and the cloud. This platform requires scalability of the edge environment according to the scale of the factory. Pratexo’s solutions can be scalable from enterprise, to edge, to field stand-alone configurations. We recognize it as the right solution to realize the concept of a virtualized control platform.”

Shigeru Shimada, Director of IoT/Industry+ service business at Cognizant Japan, said, “Industry 4.0, the concept of smart manufacturing requires software solutions in edge computers with high-performance devices. It is important to be able to achieve this quickly, flexibly, and scalably. By connecting enterprise solutions in the cloud with edge nodes through high-speed and advanced networks, you can create a new horizon. Cognizant is deeply aligned with OMRON’s concept of a Virtualized Control Platform. We have high expectations for Pratexo’s solution to create value in edge computing.”

Pratexo CEO Blaine Mathieu said, “Japan is an advanced country in AI and IoT, and a wealth of advanced technologies and products have been created. Many AI and IoT technologies are already used in R&D projects, but edge computing solutions with high scalability, fault tolerance, and security levels will be required for full-scale adoption in the future. Pratexo is the platform of choice for further advancement of edge solutions. We look forward to working with customers and partners in Japan to contribute to the development of the edge computing market.”

Blaine went on to say that we are looking forward to collaborating with Japanese companies. “Pratexo feels that edge computing is in high demand for mission-critical use cases such as infrastructure and equipment monitoring, anomaly detection, and predictive maintenance in industries such as manufacturing, power and energy, public, and real estate and construction. We are expecting to jointly develop the market with our partners. “

Pratexo, Inc., headquartered in Texas, Austin, USA, was founded in 2019 based on 20 years of experience developing scalable, high-performance large-scale systems such as NASA and Paypal.

Bring the Benefits of Cloud Computing to the Edge We have developed an edge computing platform that accelerates AI and IoT. With headquarters in the U.S., offices in Europe, and Japan, the company is expanding its business globally. Based on open and proven technology, the Pratexo Edge Micro Cloud is built with scalability, resiliency, privacy, and security. The low-code development environment Pratexo Studio can also reduce the implementation time of complex projects from months to days.