Pratexo dramatically accelerates your digital transformation by incorporating our decades of experience in building, managing, and deploying the most complex, distributed, scalable systems in the world. The Platform enables the rapid configuration, simulation, provisioning, monitoring, and optimization of an architecture running edge-enabled applications in a distributed cloud (or across multiple micro-clouds) on or near the edge.

Open architecture based on open source components. Minimize licensing costs and free your operations from black boxes you can’t control.

System security always as a first priority. Focus on meeting the needs of your organization, not worrying about the next breach or exploit.

Smart distribution. Processing where it makes the most sense. Avoid the huge costs and latency issues of processing all data in a single, centralized cloud.

Always resilient. Even if one or more nodes go down or disconnect.  Critical system elements are always up and operating. No more disconnections.

Linear scalability ensures even the most high-volume applications are supported. Future-proof your applications and avoid a key failure mode for many production-level systems.

AI and Ml can rapidly be incorporated into systems running at the edge. Make intelligent decisions and take critical actions in real time.

By combining the following key elements, Pratexo enables you to provision an enterprise-grade architecture and begin deploying complex applications up to 20x faster than you ever thought possible. 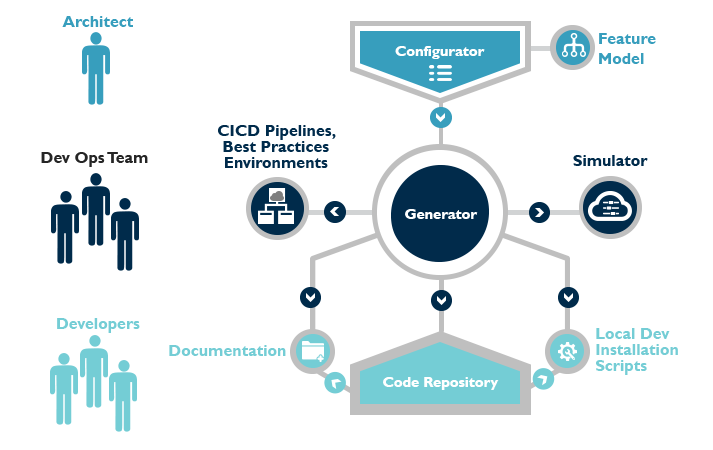 As we had built out the set of these solutions for customers, there was a different suite of software that would have been optimal for them. Picking that for them and saying, “This is the Pratexo platform,” didn’t seem wise.

I’ll give you an example. We built a system for augmenting dogs. Basically, what we do is we put a compute unit on a dog. It has a camera and has a set of sensors that can measure sound and everything in the environment, a GPS, and so on. We’re trying to aid the handlers of those dogs to see what the dog is doing, whether the dog is tired, whether the dog has seen something. We even do AI at the edge here with image recognition, and so on.

We built this system for a dog but what’s most important there? It turns out to be weight. A dog can only carry about 10% of its weight. To minimize weight, we needed a smaller compute unit. The idea of running Kubernetes, all of a sudden, became an issue because that meant a much more powerful unit than we needed. In fact, this is the battery pack we happen to use for those. It’s a very small battery pack but it could drive for about six hours now because we optimized for power consumption and weight. Our sensors were based on weight. Our compute units were based on weight. Our software was based on the most efficient way of doing things.

That’s very different from, say, we wanted to build a system for threat recognition on large vehicles or maybe something on autonomous vehicles, let’s say. We want to put something in a truck. Weight is not a big deal, right? It will increase the energy consumption there, too, but it’s not important. We can put a very big compute unit in. Sometimes, Kubernetes makes sense. Sometimes, Kubernetes does not make sense. Sometimes, we rather create a swarm configuration. We wanted to be able to give our customer a custom platform, but not so custom that we had to build it from scratch. I hate to use the word, Legos, because that’s so misused in the space but it’s about putting together a set of software components that makes sense for a use case.

Of course, we can give you a template that says, “Oh, this is something we actually built for smart buildings,” or “This is something we did for the service animals,” and so on. We can put together a configuration so that you don’t have to build everything from scratch, but you should also be able to pick and choose which software components go into your configuration. We can assemble that platform for you, and configure everything from deployment scripts to CICD pipelines to documentation about the platform, and incorporate your components into that platform if you have them, or give you a good start on writing those components.

We can do so really quickly, and we have a visual way of composing things and putting things together. We can push a button, and then maybe go to lunch or have a cup of coffee. Then when we come back, we will have provisioned all the deployment scripts for you. Deployment turned out to be an absolute nightmare in this space, which we’ve had to spend, I would say, years of effort on solving, or the CICD pipeline, or simulators, or documentation, and so on.

Think of it as buying a computer from one of your favorite computer vendors. Let’s say Dell. If you go to Dell today, you’ll be asked, “Oh, is it for work? Is it a gaming machine? What is it? Oh, here is our recommendation now. You pick one of these,” or “If you’re going to use that graphic card, you really need this memory. Oh, you used up your slots for hard drive,” or whatever it is. But they have a configurator. We call Pratexo a configurator. This is our platform configurator. It allows us to build a platform or a customized configuration of software components that will work specifically well for your use case.